An Officer and A Gentleman

As a Lt. on December 7, 1941, he was the assistant gunnery officer on the USS West Virginia. On his own, he went to damage control central and prevented her from capsizing. She had seven torpedoes in her side just like the Oklahoma. Look at pictures of Pearl Harbor, and you see the West Virginia next to the Tennessee and it does not look like she sunk, but she did. I do not believe that any one on the St. Paul knew that Captain Ricketts was the one who had saved the West Virginia. I found out about it after my wife got me a series of Morrison’s naval history series. He would come to the wardroom and apologize to the officer’s of the deck for taking the Conn away from them. No captain needs to apologize to any OOD!

He was a gentleman. He knew that whatever happened, the St. Paul would be his last ship command. The way he first handled the ship to come along side to pass messenger mail was so much different. We were ahead of the ship to which we were to go alongside, so the normal procedure was to shear out of line, slow down until we were behind the ship to which we were to pass the mail, then speed up and come alongside, slowing down as we approached. This is NOT what Captain Rickets did! He ordered full speed and right rudder, which caused the EXEC and the Navigator to turn away, leaving only the OOD, JOD, and me the JOOD to watch. This caused the ship to move in a large circle slowing down as he approached the ship’s course ending up behind the ship to which we were to pass the mail, and proceeded from that position in the normal manner. This way he maintained a maximum amount of steerageway. When a friend of mine had the duty, and had permission to go ashore to pick up his wife and parents and was waiting for the officer’s motor boat, another Captain Ricketts anecdote occurred. He comes and asks Fred what he is doing. Fred explains that he has the duty and has permission to come ashore to get his family and is waiting for the officer’s motor boat to take them to the ship for dinner. Captain Ricketts says, “Why wait”, he then helps Fred’s mother and wife into the gig and tells Fred to get into the gig and then gets into the gig himself; the gig heads toward the ship. What happens next is what is interesting, as the captain, he should go up first and receive the honors, but no, Captain Ricketts helps the ladies on to the gangway and tells Fred to go up with his family and then he went up last. Captain Ricketts was an officer and a gentleman!

As 6th division officer, I had to take a man to Captain’s Mast. Captain Ricketts required that the division officer write a report on what you thought of the man and what you recommend for punishment. He read my recommendations, ‘read the man out’ saying how much he was disappointed in him, and how he had wasted “Mr. Lauterbach’s time.” He then told me to handle the matter. This way, I could hold the man’s liberty card, and no mark would show on his service record. Not right by UCMJ, but one of Captain Ricketts’ fortes was leadership in this fashion.

I by now was a qualified OOD, it was a mid-watch, the war was over, and we were steaming between Japan and Korea. Captain Ricketts is asleep in his sea cabin. We get a visual and radar contact with constant bearing and decreasing range. I notify Captain Ricketts. He tells me to notify him when it is at a certain range. I do so. He comes out of his sea cabin. It is obvious to him that it is a trawler with a net over the side with a light on to attract fish into the net and it will pass about 50 yards or so by our starboard side. He also believes that the crew is asleep. He then blows our ships whistle and says, “I understand that this is customary around here. Good night!” The bridge watch could hardly stand up they were laughing so hard.

Again, while I was OOD and we were steaming after gunnery exercises of off San Clement at 10 Kts, Captain Ricketts ordered consecutively Standard, Full, and Flank speeds, at which the engineering watch called on the phone asking, “What was going on?” I replied, “The captain has the conn” Later Captain Ricketts ordered back full emergency! Again, the engineering watch called and got the same response from me. Captain Ricketts said that he wanted the engineers to respond immediately to engine orders when they are given. Captain Ricketts was selected for Rear Admiral while on the St. Paul and was not in the promotion zone. He later became COMSIXTHFLT and died Vice Chief of Naval Operations from what I understand. Again, he was an officer and a gentleman! 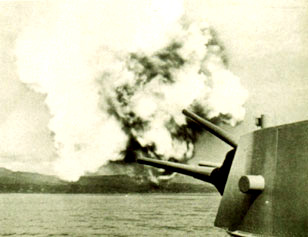 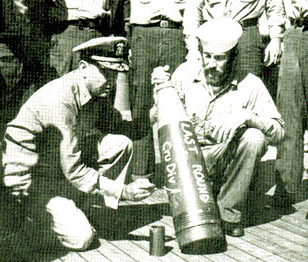